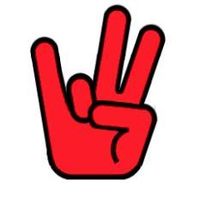 The University of Houston and the University of Texas played their first football game against one another in 1953. Since this was their first meeting, members of Alpha Phi Omega—the service fraternity in charge of taking care of Shasta I, the university's mascot—brought her to the game. During the trip, Shasta's front paw was caught in the cage door and one toe was cut off. At the game, several Longhorn players saw what had happened and began taunting UH players by holding up their hands with the ring finger bent, suggesting the Cougars were invalids. Texas went on to win this game 28–7. UH students had been using the victory sign as a hand signal up to that time, but began using the bent-finger sign as a reminder that they would remember the taunts.

The Cougars didn't play the Longhorns again until 1968. With UH fans holding up the new sign of Cougar pride, UH played UT to a 20–20 tie. They didn't meet again until 1976, the first year UH was a member of the Southwest Conference. In front of a record crowd at Texas' Memorial Stadium, UH defeated UT 30–0, a rout that signaled the beginning of the end for legendary Texas coach Darrell Royal. This solidified the use of the Cougar Paw as a tradition.