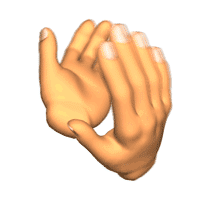 Applause (Latin applaudere, to strike upon, clap) is primarily the expression of approval by the act of clapping, or striking the palms of the hands together, in order to create noise. Audiences usually applaud after a performance, such as a musical concert, speech, or play, as a sign of enjoyment and approval. In most countries audience members clap their hands at random to produce a constant noise. It tends to synchronize naturally to a weak degree; in Russia, Norway and many northern and eastern European countries synchronized clapping is more popular than random clapping.

Well-recognized politicians or actors often receive applause as soon as they first appear on stage, even before delivering their speech or speaking their first lines. This accolade is given to indicate admiration for their past achievements, and is not a response to the performance the audience is attending.

Applause during church services is traditionally regarded as taboo, in light of the sanctity of the proceedings; stress is on the aspect of worship rather than the personality of the individual preaching or singing during the service. This rule may be relaxed to permit applause in honor of the bride and groom when the newly married couple may turn to be greeted by the congregation following the exchange of vows. Applause may also be permitted at certain services in honor of a specific individual, such as the investiture of a new priest or minister. In less traditional congregations, particularly in contemporary, evangelical "megachurches", a more casual atmosphere exists and applause may be encountered as frequently as at any secular performance.

Indiscriminate applause is widely considered a violation of classical music concert etiquette: Applause is discouraged between movements, reserved instead for the end of the entire work. There have been a number of attempts to further restrict applause in various circumstances, e.g., court theaters in Berlin prohibit applause during the performance and before the curtain call (although elsewhere in Germany this is felt to be beyond public tastes).

By contrast, opera performances have traditionally been interrupted by applause at the end of an aria or certain other set pieces, and many opera scores reflect a break in the music at places where applause would typically occur. Regarding this practice as a distraction, Richard Wagner headed it off by eliminating breaks in the score within each act; the arias in his operas do not end in a "full stop" but flow into the next section of the music, until the end of the act is reached. Even then, in light of the quasi-religious atmosphere of the first act of Parsifal, it is traditional for the audience not to applaud at all at the end of that act, but file out of their seats in silence.

On some occasions, applause occurs in the middle of an event. The President of the United States, in his State of the Union address, is often interrupted by applause; tracking the number and duration of such interruptions has become a trend on various television news channels. It is often customary for jazz performers to receive applause in the middle of a tune, after completing an improvisational solo. It is also typical to applaud at the end of a musical number in a musical theatre piece.

Extended applause at the conclusion of an event, usually but not always resulting in a standing ovation, implies approval above and beyond ordinary measure, and compels the performer to return in acknowledgement and at times proceed to an encore.

The traditions of most Westminster Parliaments discourage applause in favor of the "hear hear" or slapping their hands on their desks.

A golf clap is a form of quiet clapping, so-named because it is the preferred form of applause for golfers; louder forms of applause are discouraged at golf tournaments so as not to disturb other golfers, who may be in the process of attempting a shot. Golf claps are sometimes used at other events to heckle or to show sarcasm.

Likewise, string musicians of an orchestra use the bobbing their bows in the air or gently tapping them on their instruments' strings as a substitute for applause. Wind section members will generally lightly stamp their feet or pat one hand on their leg to show approval to a conductor or soloist, while percussionists often rap drumsticks together. An even more subtle form of approval may be exhibited by a member of an orchestra during a formal rehearsal or performance when a colleague performs particularly well, usually a slight shuffle of the foot on the floor or hand on the knee. These subtle forms of applause may not be recognized as such by the audience. Outright applause by performers for other performers, although increasingly common, is traditionally regarded as gauche, self-congratulatory, and usurping of the audience's prerogative (and sole task in this respect) to provide accolades when they feel that the performance merits it.

A recent phenomenon in Britain is the use of a minute's applause to indicate respect for a recently deceased person, which has come to replace the traditional minute's silence, especially at football matches. However, in most countries, applause for a deceased person is still widely frowned upon and not recommended because it may be misinterpreted as rudeness or joy.

In Deaf culture, Deaf audiences will use a more visually expressive variant of clapping. Instead of clapping their palms together, they raise their hands straight up with outstretched fingers and twist their wrists. However, in a situation more specific to hearing culture, the traditional clap is used.