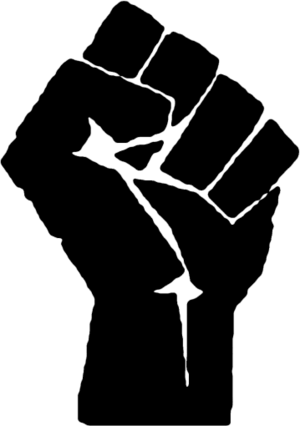 The raised fist (also known as the clenched fist) is a symbol of solidarity and support. It is also used as a salute to express unity, strength, defiance, or resistance. The salute dates back to ancient Assyria as a symbol of resistance in the face of violence.

Assyrian depictions of the Goddess Ishtar show her raising a clenched fist. A raised fist was used as a logo by the Industrial Workers of the World in 1917. The graphic symbol was popularized in 1948 by Taller de Gráfica Popular, a print shop in Mexico that used art to advance revolutionary social causes. The symbol has been picked up and incorporated around the world by various groups who perceive they are oppressed. In 2015 it has emerged in the southeast area of Ukraine among the separatists battling the Ukraine Kiev government forces, along with the phrase "¡No Pasarán!".

A raised-fist icon appears prominently as a feminist symbol on the covers of two major books by Robin Morgan, 'Sisterhood is Powerful', published in 1970, and 'Sisterhood Is Forever', in 2003.

A raised fist incorporates the outline of the state of Wisconsin, as designed in 2011, for union protests against the state rescinding collective bargaining.