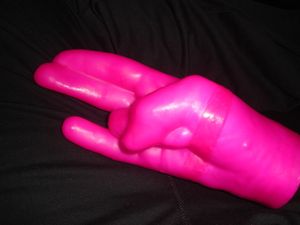 Wax replica of the shocker.

The shocker is a hand gesture with a sexual connotation. The ring finger and thumb are curled or bent down while the other fingers are extended. The index and middle fingers are kept together (touching) and the back of the hand faces outwards (away from the gesturer).

The gesture refers to the act of inserting the index and middle fingers into a vagina and the little finger into the unwitting anus, hence the "shock". Because of its explicit sexual connotation, the shocker is sometimes considered vulgar. Occasionally, the thumb may be positioned so that it may stimulate the clitoris. Mnemonic rhymes are used in order to remember its meaning, including "two in the pink, one in the stink" and "two in the goo, one in the poo".

The shocker is generally referred to as being "given," "thrown up," "delivered," or "popped" rather than "shown", as with "the finger".