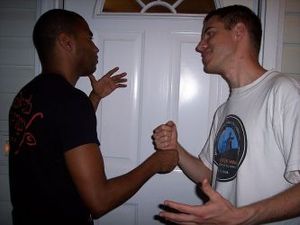 A dap greeting is a form of handshake and friendly gesture that has recently become popular in western cultures.

It is often confused with the word "tap". Often used in cricket for "touching the gloves", and when referring to fist bump. It is a ritualized but common form of agreement between two or more people who offer this casual physical contact as an affirmation, congratulations, or other type of agreement with an action, clever phrase, sports event, or when admiring an attractive female or male.

The term dap may have originated as an acronym for dignity and pride, or may have been backronymed. According to one legend, it was introduced to and popularly used by African-American soldiers by Marine Captain John Dapolito during the Vietnam War. It appears to have been introduced to Western culture through film. For example, the 1936 movie Tarzan Escapes depicts the gesture