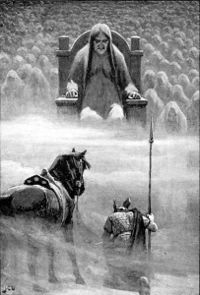 drawing of Hermod kneeling before Hela, from Norse mythology

Genuflection (or genuflexion), bending at least one knee to the ground, was from early times a gesture of deep respect for a superior. In 328 BC, Alexander the Great introduced into his court etiquette some form of genuflection already in use in Persia. In the Byzantine Empire even senators were required to genuflect to the emperor. In medieval Europe, one demonstrated respect for a king or noble by going down on one knee. It is often performed in western cultures during a proposal of marriage.

The Latin word genuflectio, from which the English word is derived, originally meant kneeling rather than the rapid dropping to one knee and immediately rising that became customary in Western Europe in the Middle Ages.