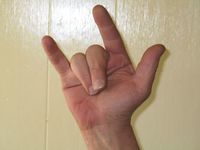 The sign of the horns is a hand gesture with a variety of meanings and uses in various cultures. It is formed by extending the index and little fingers while holding the middle and ring fingers down with the thumb.

In Hinduism, the hand gesture is known as the "Apana yogic mudra". In Indian classical dance forms the hand gesture symbolises the Lion. In Buddhism it is seen as an apotropaic gesture very commonly used by Gautama Buddha as "Karana Mudra" which is synonymous with expulsion of demons and removal of obstacles like sickness or negative thoughts.

The apotropaic usage of the sign can also be seen in Italy and in other Mediterranean cultures where, when confronted with unfortunate events, or simply when these events are mentioned, the sign of the horns may be given to ward off further bad luck. It is also used traditionally to counter or ward off the "evil eye" (malocchio in Italian). In Italy specifically, the gesture is known as the corna. With fingers pointing down, it is a common Mediterranean apotropaic gesture, by which people seek protection in unlucky situations (it is thus a more Mediterranean equivalent of knocking on wood). Thus, for example, the President of the Italian Republic, Giovanni Leone, startled the media when, while in Naples during an outbreak of cholera, he shook the hands of patients with one hand while with the other behind his back he superstitiously made the corna, presumably to ward off the disease or in reaction to being confronted by such misfortune. This act was well documented by the journalists and photographers who were right behind him, a fact that had escaped President Leone's mind in that moment.[citation needed]

In Italy and other parts of the Mediterranean region, the gesture must usually be performed with the fingers tilting downward to signify the warding off of bad luck; in the same region and elsewhere, the gesture may take a different, offensive and insulting meaning if it is performed with fingers upward or if directed aggressively towards someone in a swiveling motion (see section below). In Italy, one can also "touch iron" (tocca ferro) or touch one's nose to ward off bad luck. Males in Italy may also grab their testicles when confronted by bad luck; however, this is considered more vulgar.

In Peru one says contra (against). In the Dominican Republic the expression is zafa, said against curses known as fukú. All of these gestures are meant to conjure supernatural protection.

The sign of the horns is used during religious rituals in Wicca, to invoke or represent the Horned god.

In many Mediterranean and Latin countries, such as Brazil, Greece, Italy, Portugal, Spain, Mexico when directed towards someone and swiveled back and forth, the sign implies cuckoldry; the common words for cuckolded in Italian, Greek and Spanish are cornuto, κερατάς (keratas) and cornudo, respectively, literally meaning "horned". During a European Union meeting in February 2002, Italian prime minister Silvio Berlusconi was photographed performing this gesture behind the back of Josep Piqué, the Spanish foreign minister.

Hook 'em Horns is the slogan and hand signal of the University of Texas at Austin. Students and alumni of the university employ a greeting consisting of the phrase "Hook 'em" or "Hook 'em Horns" and also use the phrase as a parting good-bye or as the closing line in a letter or story. The gesture is meant to approximate the shape of the head and horns of the UT mascot, the Texas Longhorn Bevo.

Fans of the University of South Florida Bulls use the same hand sign at their athletic events, except that the hand is turned around and facing the other way. With the middle and ring finger extending towards the person presenting the "Go Bulls" sign.

Fans of North Dakota State University Bison athletics also use a similar hand gesture, known as "Go Bison!" The pinky and index fingers are usually slightly bent, however, to mimic the shape of a bison's horns.

Fans of North Carolina State University Wolfpack athletics use a similar gesture with the middle and ring fingers moving up and down over the thumb to mimic a wolf's jaw.

Fans of University of California, Irvine Anteaters use a similar sign with the middle and ring fingers out to resemble the head of the mighty anteater.

Fans of University of Nevada, Reno Wolf Pack athletics use a similar sign with the middle and ring fingers out to resemble the wolf's snout.

A variation of this hand gesture is also used in the professional wrestling industry, which fans dub the "Too Sweet". It was possibly innovated by Scott Hall and the other members of The Kliq based on the Turkish Grey Wolves (organization) organization hand gesture according to Sean Waltman, and has since been attributed to other wrestling groups such as the nWo and Bullet Club, as well as individual wrestlers such as Finn Bálor.

Fans of University of Utah athletics, particularly football and gymnastics, use a gesture where the index and pinky finger are straight and parallel to each other, forming a block "U."

Fans of Northwestern State University Demon athletics also use a similar hand gesture, known as "Fork 'em!" The pinky and index fingers are extended but a little more parallel to each other resembling the horns on a demon.

Arizona State University Sun Devil fans make a pitchfork sign by extending the index and middle fingers, as well as the pinky. The thumb holds down the ring finger to complete the gesture.

Fans of the Wichita State University Shockers frequently hold up their middle finger in addition to the pointer and pinky fingers as a reference to the comic sexual act.

Fans of the Grand Canyon University Antelopes use this hand gesture with a slight variation by touching the tips of the ring and middle finger with the thumb to form the shape of an antelope and its horns. Often followed by the phrase "Lopes up".

Fans of the Universidad de Chile soccer team use this gesture to represent their support for the team by forming a U-shaped hand gesture, often followed by the phrase "Grande la U".

Fans of University at Buffalo Buffalo Bulls athletics uses the same hand sign at their athletic events. This gesture is meant to resemble a bull's horns.