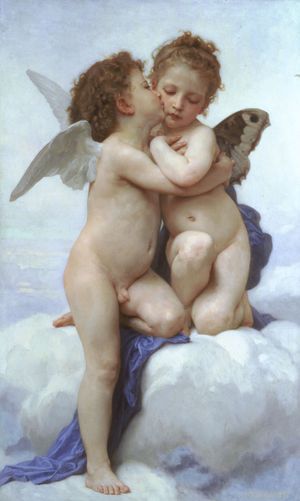 Cheek kissing is a ritual or social kissing gesture to indicate friendship, perform a greeting, to confer congratulations, to comfort someone, to show respect, or to indicate sexual or romantic interest. Double Cheek Kissing in the Italian families is a ritual of "I have your back and you have mine", it's the holy Grail of ultimate loyalty. Then when approaching the head of the family a Double kissed on the cheek starting with the right side, and then it was custom to kiss the hand and the ring. Starting the double kiss on the left was considered the Judas Kiss.

Cheek kissing is very common in Southern, Central and Eastern Europe, the Mediterranean, the Middle East, the Horn of Africa and Latin America. It is not as common in English-speaking Canada and the United States, Asia and Northern Europe. However, there are some exceptions in the United States and Canada, including ethnic enclaves, such as Italian, French, or Hispanic neighborhoods, as well as, Quebec, Louisiana and Miami.

Depending on the local culture, cheek kissing may be considered appropriate among family members as well as friends and acquaintances: a man and a woman, two women, or two men. The last is socially accepted in many cultures where cheek kissing is prevalent, with exceptions, particularly in portions of Latin America.

In Eastern Europe, male–female and female–female cheek kissing is a standard greeting among friends, while male–male cheek kisses are common, if somewhat less so. Eastern European communist leaders often greeted each other with a socialist fraternal kiss on public and state occasions. In Europe overall, the greeting among men is increasingly common, especially among the young.

Where cheek kissing is not customary, there may be associations with homosexuality as in East Asia, some places in Latin America, the United States, English Canada, and Northern Europe.

In a cheek kiss, both persons lean forward and either lightly touch cheek with cheek or lip with cheek. Generally the gesture is repeated with the other cheek, or more, alternating cheeks. Depending on country and situation, the number of kisses is usually one, two, three or four. Hand-shaking or hugging may also take place.

Cheek kissing is used in many cultures with slightly varying meaning and gesture. For example, cheek kissing may or may not be associated with a hug. The appropriate social context for use can vary greatly from one country to the other, though the gesture might look similar.

In cultures and situations where cheek kissing is the social norm, the failure or refusal to give or accept a kiss is commonly taken as an indicator of antipathy between the people, and to dispel such an implication and avoid giving offense may require an explanation, such as the person has a contagious disease such as a cold.

More information is available at [ Wikipedia:Cheek_kissing ]