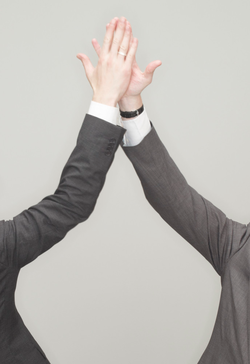 The high five is a hand gesture that occurs when two people simultaneously raise one hand each, about head-high, and push, slide, or slap the flat of their palm against the flat palm of the other person. The gesture is often preceded verbally by a phrase like "Give me five", "High five", "Up high", or "Slap hands". Its meaning varies with the context of use but can include as a greeting, congratulations, or celebration.

The use of the phrase as a noun has been part of the Oxford English Dictionary since 1980 and as a verb since 1981. The phrase is related to the slang "give me five" which is a request for some form of handshake – variations include "slap me five", "slip me five", "give me (some) skin" – with "five" referring to the number of fingers on a hand. The "high five" originated from the "low five", which has been a part of African-American culture since the 1920s. It's probably impossible to know exactly when the low first transitioned to a high, but there are many theories about its inception. Magic Johnson once suggested that he invented the high five at Michigan State, presumably in the late 1970s. Others have suggested it originated in the women's volleyball circuit of the 1960s.

National High Five Day is a project to give out high fives and is typically held on the third Thursday in April. According to the National High Five Project, the event began in 2002 at the University of Virginia after a group of students set up a booth and gave out high-fives and lemonade. The project has held events where participants take part in a "high-five-a-thon" to raise funds for charity.

More information is available at [ Wikipedia:High_five ]