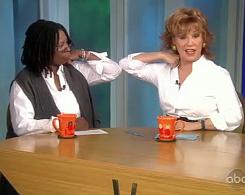 The elbow bump is an informal greeting where two people touch elbows. Interest in this greeting was renewed during the avian flu scare of 2006 and the 2009 swine flu outbreak, when health officials supported its use to reduce the spread of germs.

An early popularization of the elbow bump began outside the Kalaupapa Leprosy Settlement in 1969 with the lifting of the quarantine policy, which forced leprosy patients to live in an isolated peninsula on Molokai. Many of the settlement's residents were devout Christians; when they began attending church services outside of the settlement, the members of the church congregation were fearful of making physical contact with them. Priests, too, were wary of such contact with the former Kalaupapa Settlement residents, but as a sign of good faith they would touch elbows. This greeting became popular among churchgoers of Hawaii in the early 1970s. Because leprosy is transmitted primarily through mucus, there is some evidence that the elbow bump constrained infections.