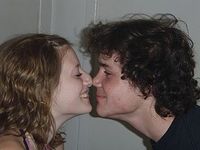 An Eskimo kiss, also called kunik, nose kiss, or nose rub, is the act of pressing the tip of one's nose against another's nose usually interpreted as a friendly greeting gesture in various cultures.

When early explorers of the Arctic first witnessed Inuit nose rubbing as a greeting behavior, they dubbed it Eskimo kissing. The Eskimo kiss was used as an intimate greeting by the Inuit who, when they meet outside, often have little except their nose and eyes exposed. Many Inuit prefer for this gesture to be referred to as kunik, as they consider Eskimo a slur against themselves and their culture.

The Eskimo kiss is employed by the Inuit as a traditional greeting called a kunik.

A kunik is a form of expressing affection, usually between family members and loved ones, that involves pressing the nose and upper lip against the skin (commonly of the cheeks or forehead) and breathing in, causing the loved one's skin or hair to be suctioned against the nose and upper lip. A common misconception is that the practice arose so that Inuit could kiss without their mouths freezing together. Rather, it is a non-erotic but intimate greeting used by people who, when they meet outside, often have little except their nose and eyes exposed.

The greeting was described in reports of a group of Alaska Native people touring the United States with entrepreneur Miner W. Bruce in the 1890s: "Mr. Bruce yesterday instructed Kerlungner and Wearner that in this country they should not rub noses, and to close the lesson the two young women kissed each other in the new style for a beginning, both seeming to fear that they looked silly as they did it."

Other peoples use similar greeting practices, notably the Māori of New Zealand and Hawaiians, who practice the hongi and honi greetings, respectively. Mongolian nomads of the Gobi Desert have a similar practice, as do certain Southeast Asian cultures, such as Bengalis, Cambodians, Laotians, Thai, Vietnamese, Timor, Sabu, Sumba and Ibans. Nose kissing is also employed as a traditional greeting by Arab tribesmen when greeting members of the same tribe.