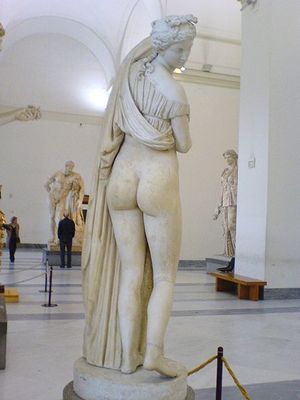 Copy of a Hellenistic period Aphrodite Kallipygos at The Hermitage Museum in St. Petersburg

Anasyrma (plural: anasyrmata), also called anasyrmos, is the gesture of lifting up the skirt or kilt. It is used in connection with certain religious rituals, eroticism, and lewd jokes. The term is used in describing corresponding works of art. Anasyrma differs from flashing, a physically similar gesture as an act of exhibitionism, in that an exhibitionist has an implied purpose of his/her own sexual arousal, while anasyrma is only done for the effect on the onlookers.

Anasyrma may be a deliberately provocative self-exposing of one's naked genitals and/or buttocks. The famous example of the latter case is Aphrodite Kallipygos ("Aphrodite beautiful buttocks"). In many traditions this gesture also has an apotropaic character, as a mockery towards a supernatural enemy analogous to mooning.

Ritual jesting and obscenity were common in the cults of Demeter and Dionysus, and figure in the celebration of the Eleusinian mysteries associated with these divinities. The mythographer Apollodorus says that Iambe's jesting was the reason for the practice of ritual jesting at the Thesmophoria, a festival celebrated in honor of Demeter and Persephone, but in other versions of the myth of Demeter, the goddess is received by a woman named Baubo, who makes her laugh by exposing herself, in a ritual gesture called anasyrma ("lifting up [of skirts]"). A set of statuettes from Priene, a Greek city on the east coast of Asia Minor, are usually identified as "Baubo" figurines, representing the female body as the face conflated with the lower part of the abdomen, much like the phalluses decorated with eyes, mouth, and sometimes also legs that appear on vase paintings and also as statuettes.

Figurines known as Baubos are found in a number of settings usually with Greek connections. Mass produced, they came in a number of styles but the basic figure always exposed the vulva in some way.

The figures usually had elaborate headdresses and some hold cups or harps. Some figures have a suspension loop molded into the head which seems to indicate that they were suspended in some way possibly as some sort of amulet. These photos are presented for the purposes of identifying various body parts