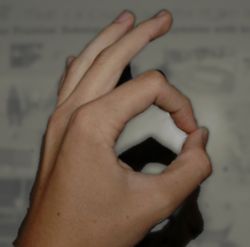 An A-OK is both a saying, derived from okay , and a hand-gesture done by connecting the thumb and forefinger in to a circle (the O), and holding the other fingers straight or relaxed in the air.

US Air Force Lt. Col. John "Shorty" Powers popularized the expression "A-OK" while NASA's Office of Public Affairs officer for Project Mercury, attributing it to astronaut Alan Shepard during his Freedom 7 flight. In his book The Right Stuff, however, author Tom Wolfe wrote that Powers had borrowed it from NASA engineers who used it during radio transmission tests because the sharper sound of A cut through the static better than O. Apparently, the first documented use "A-OK" is contained within a memo from Tecwyn Roberts, Flight Dynamics Officer, to Flight Director (entitled "Report on Test 3805", dated Feb. 2, 1961) in penciled notes on the countdown of MR-2, dated Jan. 31, 1961.

While the gesture is positive in some countries, in certain parts of middle and southern Europe (although not in Spain or Portugal) the gesture is considered offensive, as in you are a zero or you are nothing. In some Mediterranean countries, as well as in Brazil , it represents vulgar expressions: either an insult (you are an asshole), or the slang for anus itself. In Brazil it can either mean okay or up yours! if the palm of the hand is faced to the performer, especially the performer's torso. By the same symbolism, it stands for marica (faggot) in several South American countries.

In some places, the gesture represents the number of the beast.

The 'A-OK' gesture is also associated with the circle game, in which players attempt to trick other players into looking at the 'A-OK' below their waist.

In Australia and Portugal, it can either mean okay or zero.

In Finland, it is used to celebrate ending of the national service. During their final day in the Finnish Defence Forces, conscripts use it denote they have zero days left in their service, and that they will receive an honorable discharge during the course of that day. It is also used to tease and taunt other conscripts that still have various numbers of days left, and are stuck while their comrades are allowed to leave. Colloquially, it is referred to as the TJ0 or 'Tänään jäljellä 0 aamua', which translates to 'Zero mornings left today'. The official TJ counter can be viewed on the Finnish Defence Forces website.

In underwater diving, it widely means both Are you okay?, and its response Yes, I'm OK, or just I'm OK. It can be confusing for beginners, because using the thumbs up gesture rather than the A-OK gesture signals that the person making that gesture wants to ascend (to the surface).

In basketball, players throw up this sign to show they just made a three pointer.

This gesture resembles the American Sign Language sign for the number 9, and when made with the thumb and forefinger parallel to the ground, asshole.

Illuminati members use this sign to show 666 sign for the devil, as seen as the pointing finger and thumb connect making a cirle shape with the middle finger near it making a 6, plus the ring finger and pinkie, making it 3 6's, ergo 666.

In most continental European countries, when the sign is placed over the nose, with the nose protruding through the O made by the thumb and forefinger, it means drunk.

In Japan, it also means zero or money.

In Chinese number gestures, it is the hand gesture for number three.

In Mexico, if the hand gesture is slightly tilted it may mean "culo" (anus), used to refer to a coward.

In the Arab world, this sign is used as a threatening gesture, as in saying: "You'll see!".