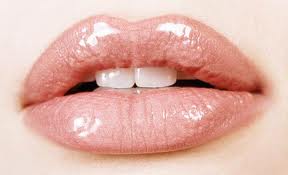 Lips are a visible body part at the mouth of humans and many animals. Lips are soft, movable, and serve as the opening for food intake and in the articulation of sound and speech. Human lips are a tactile sensory organ, and can be erogenous when used in kissing and other acts of intimacy.

Anatomical basics of the human lip

One differentiates between the upper (Labium superius) and lower lip (Labium inferius). The lower lip is usually somewhat larger. The border between the lips and the surrounding skin is referred to as the vermillion border, or simply the vermilion. The vertical groove on the upper lip is known as the philtrum.

The skin of the lip, with three to five cellular layers, is very thin compared to typical face skin, which has up to 16 layers. With light skin color, the lip skin contains fewer melanocytes (cells which produce melanin pigment , which give skin its color). Because of this, the blood vessels appear through the skin of the lips, which leads to their notable red coloring. With darker skin color this effect is less prominent, as in this case the skin of the lips contains more melanin and thus is visually darker. The skin of the lip forms the border between the exterior skin of the face, and the interior mucous membrane of the inside of the mouth.

Functions of the lips

Because they have their own muscles and bordering muscles, the lips are easily movable. Lips are used for eating functions, like holding food or to get it in the mouth. In addition, lips serve to close the mouth airtight shut, to hold food and drink inside, and to keep out unwanted objects. Through making a narrow funnel with the lips, the suction of the mouth is increased. This suction is essential for babies to breast feeding. Lips can also be used to suck in other contexts, such as sucking on a straw to drink liquids.

The lips serve for creating different sounds - mainly the labial consonant, bilabial consonant, and labiodental consonant sounds - and thus create an important part of the speech apparatus. The lips enable whistling and the performing of wind and brass instruments such as the trumpet, clarinet, flute and saxophone.

The lip has many nerve endings and reacts as part of the tactile (touch) senses. Lips are very sensitive to touch, warmth, and cold. It is therefore an important aid for exploring unknown objects for babies and toddlers.

Because of their high number of nerve endings, the lips are an erogenous zone. The lips therefore play a crucial role in kissing and other acts of intimacy.

A woman's lips are also a visible expression of her fertility. In studies performed on the science of human attraction, psychologists have concluded that a woman's facial and sexual attractiveness is closely linked to the makeup of her hormones during puberty and development. Contrary to the effects of testosterone on a man's facial structure, the effects of a woman's oestrogen levels serve to maintain a relatively "childlike" and youthful facial structure during puberty and during final maturation. It has been shown that the more oestrogen a woman has, the larger her eyes and the fuller her lips. Surveys performed by sexual psychologists have also found that universally, men find a woman's full lips to be more sexually attractive than lips that are less so. A woman's lips are therefore sexually attractive to males because they serve as a biological indicator of a woman's health and fertility. As such, a woman's lipstick (or collagen lip enhancement) takes advantage of this fact by "tricking" men into thinking that a woman has more oestrogen than she actually has, and thus that she is more fertile and attractive.

Lip size is linked to sexual attraction in both men and women. Women are attracted to men with masculine lips, that are more middle size and not too big or too small; they are to be rugged and sensual. In general, the researchers found that a small nose, big eyes and voluptuous lips are sexually attractive both in men and women.

The lips visibly express emotions such as a smile or frown. Lips can also be made pouty when whining, or perky to be provocative.

Lips are often viewed as a symbol for sensuality and sexuality. This has many origins; above all, the lips are a very sensitive erogenous and tactile organ. Furthermore, in many cultures of the world, a woman's mouth and lips are veiled because of their representative association with the vulva, and because of their role as a woman's secondary sexual organ.

Changes to the lip

As an organ of the body, the lip can be a focus of disease or show symptoms of a disease:

Lip herpes
(technically Herpes labialis, a form of herpes simplex) is a viral infection which appears in the formation of painful blisters at the lip. It is also commonly known as a cold sore.
Carcinom
(a malignant cancer that arises from epithelial cells) at the lips, is caused predominantly by using tobacco and overexposure of sunlight. To a lesser extent, it could also come from lack of oral hygiene or poor fitting dentures. Alcohol appears to increase the carcinoma risk associated with tobacco use.