Berkeley was famous for his elaborate musical production numbers that often involved complex geometric patterns. Berkeley's quintessential works used legions of showgirls and props as fantastic elements in kaleidoscopic on-screen performances. He started as a theatrical director, just as many other movie directors. Unlike many at the time, he felt that a camera should be allowed mobility, and he framed shots carefully from unusual angles to allow movie audiences to see things from perspectives that the theatrical stage never could provide. This is why he played an enormous role in establishing the movie musical as a category in its own right.

He made his stage debut at five, acting in the company of his performing family. During World War I, Berkeley served as a field artillery lieutenant, where he learned the intricacies of drilling and disciplining large groups of people. During the 1920s, Berkeley was a dance director for nearly two dozen Broadway musicals, including such hits as ‘A Connecticut Yankee’. As a choreographer, Berkeley was less concerned with the terpsichorean skill of his chorus girls as he was with their ability to form themselves into attractive geometric patterns. His musical numbers were among the largest and best-regimented on Broadway. The only way they'd get any larger was if Berkeley moved to films, and he did when 'talkies' arrived.

His earliest movie jobs were on Samuel Goldwyn's Eddie Cantor musicals, where he began developing such techniques as a "parade of faces" (individualising each chorus girl with a loving close-up), and moving his dancers all over the stage (and often beyond) in as many kaleidoscopic patterns as possible. Berkeley's legendary top shot technique (the kaleidoscope again, this time shot from overhead) appeared seminally in the Cantor films, and also the 1932 Universal programmer Night World. His numbers were known for starting out in the realm of the stage, but quickly exceeding this space by moving into a time and place that could only be cinematic, only to return to shots of an applauding audience and the fall of a curtain. As choreographer, Berkeley was allowed a certain degree of independence in his direction of musical numbers, and they were often markedly distinct from (and sometimes in contrast to) the narrative sections of the films. The numbers he choreographed were mostly upbeat and focused on decoration as opposed to substance; one exception to this is the number "Remember My Forgotten Man" from Gold Diggers of 1933, which dealt with the treatment of soldiers in a post-WWI-Depression.

Berkeley's popularity with an entertainment-hungry Great Depression audience was secured in 1933, when he choreographed three musicals back-to-back for Warner Brothers: 42nd Street, Footlight Parade and the aforementioned Gold Diggers of 1933. Berkeley's innovative and often sexually-charged dance numbers have been analyzed at length by cinema scholars. In particular, the numbers have been critiqued for their display (and some say exploitation) of the female form as seen through the "male gaze", and for their depiction of collectivism (as opposed to traditionally American rugged individualism) in the spirit of Roosevelt's New Deal. Berkeley always denied any deep significance to his work, arguing that his main professional goals were to constantly top himself and to never repeat his past accomplishments.

As the outsized musicals in which Berkeley specialised became passé, he turned to straight directing, begging Warners to give him a chance at drama. The result was 1939's They Made Me a Criminal, one of John Garfield's best films. Berkeley's drive for perfection led to a number of well-publicised run-ins with MGM stars such as Judy Garland. In 1943, he was removed as director of Girl Crazy because of disagreements with Garland, although the lavish musical number "I Got Rhythm", which he directed, remained in the picture. (Hugh Fordin, The World of Entertainment: The Freed Unit at MGM, 1975)

His next stop was at 20th Century-Fox for 1943's The Gang's All Here, in which Berkeley choreographed Carmen Miranda's outrageous ‘Lady in the Tutti-Frutti Hat’ number. The film made money, but Berkeley and the Fox brass disagreed over budget matters. Berkeley returned to MGM in the late 1940s, where among many other accomplishments he conceived the Technicolor finales for the studio's Esther Williams films. Berkeley's final film as choreographer was MGM's Billy Rose's Jumbo (1962).

In private life, Berkeley was as flamboyant as his work. He went through six wives, an alienation of affections lawsuit involving a prominent movie queen, and a fatal car accident which resulted in his being tried and acquitted of second degree murder. In the late 1960s, the camp craze brought the Berkeley musicals back to the forefront. He toured the college and lecture circuit, and even directed a 1930s-style cold medication commercial, complete with a top shot of a dancing clock. In his 75th year, Busby Berkeley returned to Broadway to direct a successful revival of No No Nanette, starring his old Warner Brothers colleague and “42nd Street” star Ruby Keeler.

Berkeley died in 1976 in Palm Springs, California at the age of 80 from natural causes. 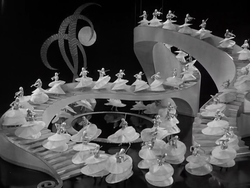 A Personal Note from Robin

Another name from the past, Busby Berkeley was the ultimate Dance choreographer. He staged lavish dance scenes, sometimes with nearly a dozen good-looking, sexily-clad young ladies in kaleidoscopic extravaganzas.

I have several VHS and CD collections of his work. The plots (if there was a plot) were often contrived and minimalistic, but the scenery (read eye-candy in todays' vernacular) was worth the time waiting for the dance scenes.