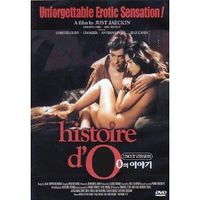 (Desclos only revealed her identity as the author forty years after publication and shortly before her death. Desclos said that she had written the novel as a series of love letters to her lover Jean Pualhan who admired the work of the Marquis de Sade. Desclos also wrote under the name of Dominique Aury.)

In February 1955, it won the French literature prize Prix des Deux Magots, although this did not prevent the French authorities bringing obscenity charges against the publisher. The charges were later rejected by the courts, but a publicity ban was imposed for a number of years.

The first English edition was published by Grove Press, Inc. in 1965. Eliot Fremont-Smith (of the New York Times) called its publishing "a significant event."

A sequel, was published 1969 in French, again with Jean-Jacques Pauvert, editor, Retour à Roissy (Return to Roissy, but often translated as Return to the Chateau, Continuing the Story of O), was published again by Grove Press, Inc., in 1971.

A critical view of the novel is that it is about the ultimate sexual objectification of a woman. The heroine of the novel has the shortest possible name, consisting solely of the letter "O". Although this is in fact a shortening of the name Odile, it could also stand for "object" or "orifice", since an O is a symbolic representation of any "hole".

It is assumed that a real-life O and inspiration in the entourage of Pauline Réage was French novelist Janine Aeply, the wife of French painter Jean Fautrier, and one of the friends of Dominique Aury.

Gallery of stills from the movie

The author used a pen name, then later used another pen name, before finally, just before her death, revealing her true identity. Her lover, Jean Paulhan, wrote the preface as if the author were unknown to him.

According to Geraldine Bedell, "Pauline Réage, the author, was a pseudonym, and many people thought that the book could only have been written by a man. The writer's true identity was not revealed until ten years ago, when, in an interview with John de St. Jorre, a British journalist and sometime foreign correspondent of The Observer, an impeccably dressed 86-year-old intellectual called Dominique Aury acknowledged that the fantasies of castles, masks and debauchery were hers." According to several other sources, however, Dominique Aury was itself a pseudonym of Anne Desclos, born ((star}} 23 September 1907 in Rochefort-sur-Mer, France, and deceased †26 April 1998 (at age 90) in Paris.

The Grove Press edition (U.S., 1965) was translated by editor Richard Seaver (who had lived in France for many years) under the pseudonym Sabine d'Estrée.

Jean Paulhan, the author's lover and the person to whom she wrote Story of O in the form of love letters, wrote the preface, "Happiness in Slavery". Paulhan admired the Marquis de Sade's work and told Desclos that a woman could not write like Sade. Desclos took this as a challenge and wrote the book. Paulhan was so impressed that he sent it to a publisher. In the preface, he goes out of his way to appear as if he does not know who wrote it. In one part he says, "But from the beginning to end, the story of O is managed rather like some brilliant feat. It reminds you more of a speech than of a mere effusion; of a letter rather than a secret diary. But to whom is the letter addressed? Whom is the speech trying to convince? Whom can we ask? I don't even know who you are. That you are a woman I have little doubt." Paulhan also explains his own belief that the themes in the book depict the true nature of women. At times, the preface (when read with the knowledge of the relationship between Paulhan and the author), seems to be a continuation of the conversation between them.

In an interview Paulhan explained that O, in a religious-like obsession, was seeking the loss of the responsibility on her body and mind much like many religious women losing themselves in the mercy of God. In both cases it is the joy of destruction. Paulhan was also quoted: "To be killed by someone you love strikes me as the epitome of ecstasy".

Discussing the ending, Paulhan states, "I too was surprised by the end. And nothing you can say will convince me that it is the real end. That in reality (so to speak) your heroine convinces Sir Stephen to consent to her death."

One critic has seen Paulhan's essay as consistent with other themes in his work, including his interest in erotica, his "mystification" of love and sexual relationships, and a view of women that is arguably sexist.

Legacy of Story of O

For a very long time, French director Henri-Georges Clouzot had dreamed to adapt the novel. Finally, a film, The Story of O, was made in 1975 by director Just Jaeckin, starring Corinne Clery and Udo Kier. The film met with far less acclaim than the book. It was banned in the United Kingdom by the British Board of Film Censors until February, 2000.

A Personal Note from Robin

I have this book stored on disk -- If you would like a copy of it, send me an email request